SteveyJoe
10 posts Member
November 4, 2018 11:24PM
Does anyone else feel like General Grievous has too few standard attacks? And that they’re really bland for Grievous? He only uses 4 animations and they keep repeating in the same order over and over, which takes away realism. Plus they’re not unique attacks that only a cyborg could do, but instead are simple slashes that any Jedi could do without having a mechanical body. I personally find them very boring and disappointing compared to what I was expecting from his attacks. It bummed me out hard honestly. We all watched Grievous in the Clone Wars where we always see him using cool and unusual attacks. Grievous is known for his special fighting style that uses spinning wrists, full-body twirls, grabbing and throwing enemies with his clawed feet... that’s what I was excited about seeing from Grievous in Battlefront II. To quote Count Dooku from the 2003 Clone Wars animated series as he trained Grievous in lightsaber combat: ”Stop using standard attacks. Use the unorthodox!” And that’s exactly what Star Wars Battlefront II’s General Grievous needs to do I think. Plus it wouldn’t hurt to implement some 4-armed moves into his standard attacks instead of only having him use 2 sabers all the time. “Thrust surge” and “unrelenting advance” just doesn’t seem to be enough 4-armed action. I feel like he should be able to walk around with all his sabers out at once as an optional fighting mode really (players could toggle it on and off to put away the extra sabers and return to 2-saber combat if that’s their preference...because that’s just what Grievous often does, so it makes perfect sense to me), but the main issue is the short supply of animations he has and the blandness of those moves. 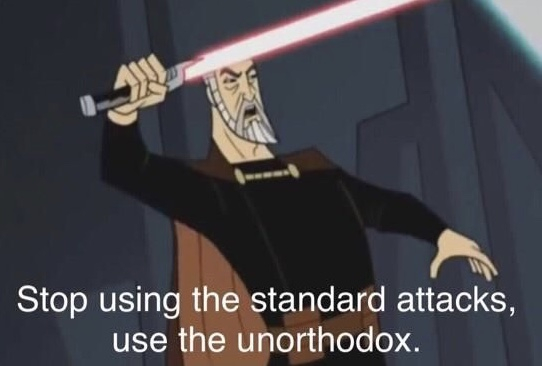