What the next battlefront 2 update should be. 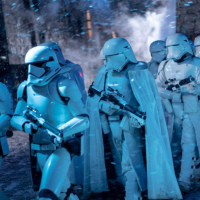 Commander_CT_135
511 posts Member
March 22, 2019 11:28AM
With the new update coming later month, I think the clone wars season should be over(for now) and now let’s move on what the next season should be.

New heroes. Jyn Erso and director krennic.
Ability’s, jyn’s ability’s are truncheon strike, it is activated by either the ability button or the melee button, it will deal 120 damage and can be used up to 5 times before cooling down.
Next ability is weapon extension, similar to her ability from battlefront 2015.
Last we got charge, Jyn sprints forward she will have all damage reduced by 50% and will knock all enemies in her path
Krennic, experimental weapons, all near by allies will have their unlimited shots for a period of time. Overcharge, overloads his pistol to fire a deadly blast dealing 125 damage.
Director of weapons Research, deploys a a turret that can be mounted.
General. Both are blaster characters. They both have 675 health . They deal 115 base damage, 120 with headshot. Jyn will have her attire from most of r1 by default, and the uniform she steals from the imperial when they arrive on scarif will be available for 20 thousand. Krennic’s only skin is what he wears in the whole film.


If you have any suggestions please let me know,
Thank you for your time
1