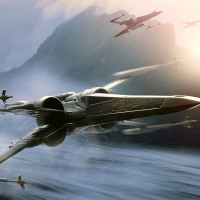 Genin
633 posts Member
December 10, 2019 11:34AM
Since the release of the mode, i miss Starfighters presence in Capital Supremacy... There is literally everything (Heroes, tanks, reinforcements, speeders ecc) except starfighters.

Maybe with the new maps coming, they could design them to introuce SF in the gameplay, or....


...wouldn't be amazing if, in the second phase, instead of destroy the capital ship from inside (which is getting boring after a while, and also "anachronistic" in a Star wars way, considering the shields of the capital ship) there would be a starfighters battle to destroy it?

Like: if the team n.1 win the ground phase, it has the chance to jump into the ships to attack the cruiser of team n.2, that has to defend it with their starfighters. Bombers of theam n.1 should hit the weak spots of the capital ship, with fighters protecting them, while interceptors of team n.2 would try to take them down to avoid it. Limited amount of time, but the damage to the capital ship remains, for a second try (eventually). Similar to the actual CS but with an exciting second phase on starfighters.

I think it would be the _definitive star wars experience_, how about what you think?
22