Any chance we can get mandalorians as a reinforcement for season 7? 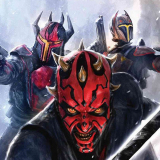 Lyc4n
1887 posts Member
January 23, 2020 11:39PM
You can see bo katan and others fighting along side the clones, would be awesome to have them with the recent hype around mandalorians and the new just pack mechanics. Really wouldnt mind them replacing the wookie, they make just as much sense as them for reinforcements.

I dont think the droids fight alongside maul so we cant get a cis mandalorian unfortunatly. Instead of making another reinforcement just make the wookie unique to rebels. And kashyyyk.
0