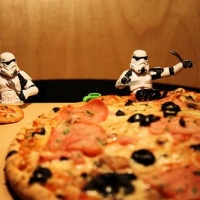 First_Order_of_Pizza
204 posts Member
February 9, 2020 5:00AM edited February 9
Ever since the conception of Battlefront as a franchise, the premise has always been to allow the player to live out their fantasy battles in the Star Wars universe. What better way to fulfill this than by letting us, the players, choose to play any era on any planet offline in Instant Action mode?

Imagine the number of combinations of new interesting gameplay experiences this could create and what that would do for the overall replayability and longevity of this great game. Technically the planet Tattooine, for example, existed way back in the clone wars and still exists during the time of age of resistance. There's no reason why we shouldn't be able to invade that planet as droids or the First Order. As far as droids and clone troopers going at it in a wrecked Imperial Star Destroyer on Jakku, why the heck not? If it's offline, it's not breaking immersion for anyone else and it adds to the replayability.

It would be like having all of the Star Wars action figures and toys and being able to play with them wherever and however we wanted. Just imagine the possibilities.

The way I imagine it working is on the Instant Action screen, you would choose the planet and right below that you would select the era. Then simply pressing X, as usual, would toggle between the two factions for the selected era.

One of the reasons I feel this is an important feature to add in is because certain people who may prefer to play in the age of the resistance will feel left out only having 3 maps to choose from. If I prefer playing as the First Order, I would then have just as many maps to play on as people who like playing as clone troopers. Everything would feel fair and balanced and cater equally to all Star Wars fans, regardless of their preferred era. The way it stands now, I can only use my beloved First Order AT-ST on Ajan Kloss, but I would love to be able to stomp down the streets of Naboo in that thing.

This is something I have seen hundreds of people on Reddit, specifically in the 'arcade focused feedback,' thread request a year or so ago. PLEASE, Dennis. PLEASE, Ben. PLEASE, entirety of the Battlefront 2 team at DICE -- PLEASE make this a reality.
2
Reply to this topic
Sign In or Register to comment.