HvV is the worst it has ever been 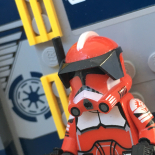 CC_1010
3538 posts Member
February 14, 2020 7:28PM
Why am I not surprised? The brain dead Vader buff is the actually not the worst thing. The hit boxes are completely broken, lag everywhere I go, block fails and the worst thing: every one gets staggered out of their abilities when hit. Grievous can now only use his swings basically and obis push is useless against bb9e and will get you killed. What a mess. Dice has failed. I am actually surprised that there is no huge outrage. Perhaps we all already accepted that this team can’t give us a proper game... thank you. I won’t play hvv until the next update.
35