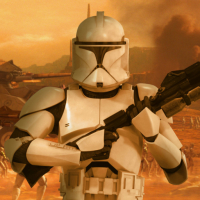 Jedi_Apprentice
72 posts Member
February 15, 2020 2:20AM
They are the best of the best of the Empire. Royal Guards fought each other to the death, the victors claimed the prize to be the Emperor's personal guards.

I really miss these guys from Battlefront 2015, they have the chance to be really unique with their weapon of choice, the force pike. I have no problem with bringing back the Honor Guard system from Battlefront 2015. It was an extra detail that made those heroes feel unique and added extra "flavor", just keep it out of HvV for all our sakes.

If they are worried about the cannon for whatever reason then you could have them to be able to spend points on whilst Palpatine is currently alive as their sole purpose is to protect him at all costs.

All im saying is if the Prequel and Sequel Trilogy got new reinforcements in their age then there is no reasons why the OT shouldn't either and these guys would arguably be the coolest and most nostalgic of them all.