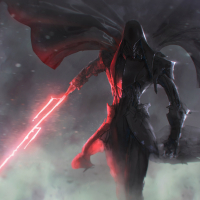 Flamez
315 posts Member
February 28, 2020 12:43AM edited February 29
Is it too much to ask for a tutorial to teach players the basics of teamplay? Every game is a curb-stomp because nobody(exaggerating here) has the fundamentals down.
Can we please get emotes or way-markers so we can communicate on console. Maybe more in game tips.

When someone enters H/V for the first time they should have basic knowledge on not what to do, like blocking your teams gunshots, force pushing ppl miles away, fighting 1v4s etc...
and what they should be doing instead like, huddling together and protecting blaster heros.

Hate to bring up the past but the target system had more incentive to stay as a group since you had to protect something. There's no incentive to group up now and the lightside requires more teamwork; which is why they always lose. perhaps there should be role system to indicate what players should be doing when they pick a character like support/tank/dps. or give a description on the strengths and weakness of a character so they know what to play around... Big deal

"Remove the stagger from the game"