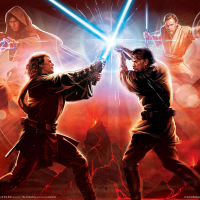 hardvibes
29 posts Member
March 12, 2020 10:34AM edited March 12
The last time I played battlefront II was 5 or 6 months ago. Most of the time I was in the top 3 each HvV game.
Now a lot has changed and I can't get kills anymore. I die all the time, expecially when I'm on the light side. All my characters (force users) are lvl40+ and cards are maxed out of course.

Should I change cards? Change defense and attack style?
Do some of you know an effective and updated guide on youtube?

And please don't write the usual "yOu'rE jUsT a nOob".
Try to be mature about it.

EDIT: I NOTICED I OWN WITH VADER.....BUT THE OTHERS MMHH...DID HE GET A SUPER BUFF?
Post edited by hardvibes on March 12
0