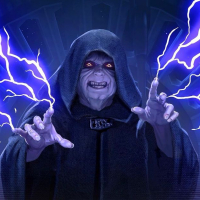 It should pause her ability NOT cancel. The description of his ability says disable blasters for 2 seconds not cancel abilities.
7