I’m bored so here are concepts for Ahsoka and Ventress 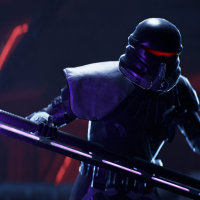 Commander_CT_135
710 posts Member
April 3, 2020 6:25PM
I know this is going to have a lot of insightfuls and arguing/bickering/trolling which I expect but I’m only doing this cause I’m bored from self quarantine.

Ahsoka:
Health: 650
Health regen: 250
Delay before health regen: 3 seconds
Damage: 120
Damage to back: 135
Stamina: 13
Delay before stamina regen: 3 seconds
Swing speed: 0.8 seconds
Speed: similar to Sith Trooper using combat rush
Description: fast and agile, Ahsoka is best used to ambush and surprise her enemies but is best to get out of a situation before things get too messy.
Left ability: Pressing push: Pushes a single enemy extremely far. Damage is 145 while knockback is 15 meters. Cooldown is 13 seconds. This cannot be blocked but knockback is reduced if blocked
Middle ability: protectful Padawan: all allies in a nearby radius immediately have their health regenerate and their abilities are instantly cooled down, also if they are suffering from any effect(EX: Sith Trooper Grenade effect or Kylo Freeze) those effects are dispelled. Ahsoka doesn’t gain these bonuses but she gets a 50% damage reduction. Cooldown is 20 seconds while duration is 10 seconds
Right ability: leaping slashes: Ahsoka leaps at the nearest enemy and inflicts high damage. This cannot be blocked. Damage is 150. Cooldown is 17 seconds.

Ventress:
Health: 700
Health regen: 225
Delay before health regen: 5 seconds
Damage: 130
Damage to back: 145
Stamina: 14
Delay before stamina regen: 4 seconds
Speed: same as all other saber heroes
Description: a deadly assassin, Ventress uses her anger and deadly skills to eliminate her enemies and get away before anyone realizes she was there.
Left ability: Sinister Strike: Ventress dashes at the nearest enemy with her sabers on the ground and deal heavy damage which is 150. Cooldown is 20 seconds
Middle ability: choke pull: all enemies in a radius are chocked for a while and are pulled to Ventress and are dropped to the ground leaving them vulnerable. Duration of choke is 4 seconds. DPS is 30. Cooldown is 22 seconds. Ventress gains 75% damage reduction.
Right ability: sinister throw: Ventress throws one of her sabers and can continue fighting with her other saber. The saber will home in up to 3 enemies and damage them and will comeback to Ventress once they hit those enemies. Cooldown is 15 seconds and damage is 130. It can be blocked.

Once again I made these because I was bored. I hope you enjoyed them(but I know some of you won’t).
0