What did you like about the Han Solo movie? [SPOILERS] [you have been warned] 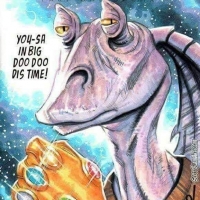 I really liked the scene where han was fighting in the empire, it gave me a really good imperial guard feel and i almost started squealing like a girl when i saw it

I also really liked when that droid **** let out all the droids, although it felt really forced and kinda cringy

Darth Maul showing up was awesome, but i doubt most people realize it's darth maul, even with his double lightsaber.
(let's be honest, the vast majority of star wars viewers don't even know TCW exists)

What do you guys think

don't forget to like, comment and subscribe
Many of the arguments we have about this game would not exist if this was a single player focused game like it should have been since day 1.
3