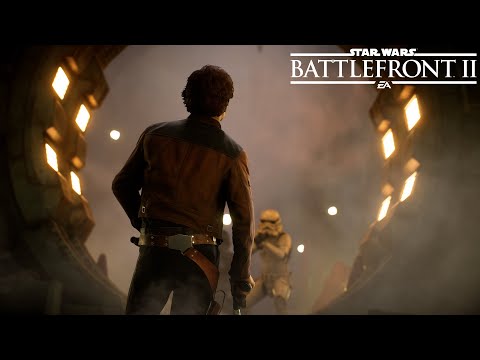 The Han Solo Season is underway and we’re back with another Community Transmission to tell you a little bit more about what’s coming in June, more specifically, on June 12th.
Kessel

Located in the Outer Rim and known for producing the valuable hypermatter, coaxium , Kessel is a planet with a lot of history within the Star Wars™ universe, and we’re excited to be bringing it to Star Wars Battlefront II.

You’ll be taking to Kessel across several different game modes; Arcade, Blast, Hero Showdown, Heroes vs Villains and Extraction – did we mention that’s coming back?

The Rebels have located shipments belonging to the Empire and must escort it to their transport ship. Unfortunately for the Rebels, the Empire has learned of their plans and have set out to stop them, deploying troopers of their own.

Victory occurs when either the Rebels escape with the shipment or the time runs out, in which case the Empire will seal the win.

Last month we said that June will be a bit more legendary and we can confirm that we’ll have four new Legendary Appearances arriving into the game, all based around the characters of Solo: A Star Wars Story.

Finishing up the new Appearances for June will be Chewbacca with his Epic Vandor Heist look.

When you talk about Han Solo it won’t be long before conversation switches over to one of the most iconic ships in the Star Wars universe, the Millennium Falcon. But this isn’t the Falcon that we know from the Original Trilogy. This is the Millennium Falcon when it belonged to Lando and before it was lost to Han in that now infamous bet.

This stylish and customised version of the Millennium Falcon is faster and more agile but comes at the price of being less resilient due to the lack of modifications made by Han.

Its primary weapon comes in the form of Two Laser Cannons with alternate firing. This automatic weapon deals medium damage over a medium range but with a high rate of fire. As with all Starfighters it will have three abilities.

Coaxium Injection L3-37 Co-Pilot Synchronized Fire
Menu Updates
In May we released an update to the menu that removed the hologram effect. One of the more prominent bits of discussion around this was if we were also going to update any of the other menus.

Coming in June we can confirm that we’ll be removing the hologram styled menus from both the Spawn Screen and the end of round MVP screen. Both screens will have a new look to them, in line with the main menu that was added back in May.

We heard a lot of positives over the new look of the menu, especially around the character models that now populate them. What if you could inspect the models and interact with them even further?

Alongside the above updates to the menu screens we are also releasing a change that will allow you to inspect the character models. From within the appearance menu you’ll be able to rotate, pan up, pan down and zoom in and out.

Jetpack Cargo
The last time Jetpack Cargo was available in the game we saw a lot of feedback surrounding the amount of time each game could take. To help combat this we are implementing a timer of six minutes to each game. We’ve also updated the User Interface, which will now display the score and time remaining throughout the duration of the game.

The map has also undergone some changes, most notably Bespin has now been replaced with Yavin 4. The final change we’ve made is that when you spawn you no longer pick a character, instead you pick the weapon you want to use.

We’re looking forward to hearing your feedback on these changes once Jetpack Cargo returns.

A small Quality of Life addition is being added to the front menu and revolves around Timed Challenges. When the next update arrives, you’ll notice that the Timed Challenges will now display on the Front Menu alongside the crate notification. Should you wish, you can still navigate to them via the Career menu.

Bug Fixes, Tweaks and Improvements
As usual there’s a host of fixes, alongside some balance changes going into the update. You can find the full list over in the patch notes here.

EA Play
If you’re heading to EA Play on June 9-11 then you’ll be able to experience Extraction on Kessel. It’ll be available throughout the entire length of the show in the Fan Fest. The team have started to touch down into Los Angeles and we've got more to talk about in just a few days time, don't miss it.