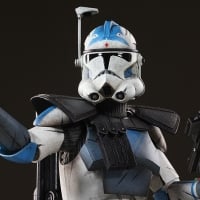 DrX2345
2888 posts Member
June 6, 2018 7:16PM edited June 2018
Ok, so it's been a while. While we've got a host of cool and unique Dark Side Enforcers, when you're playing as the Light Side, you've only got one option, which needs to be changed. Here's two ideas I made in another thread.
Republic Enforcer - Galactic Marine 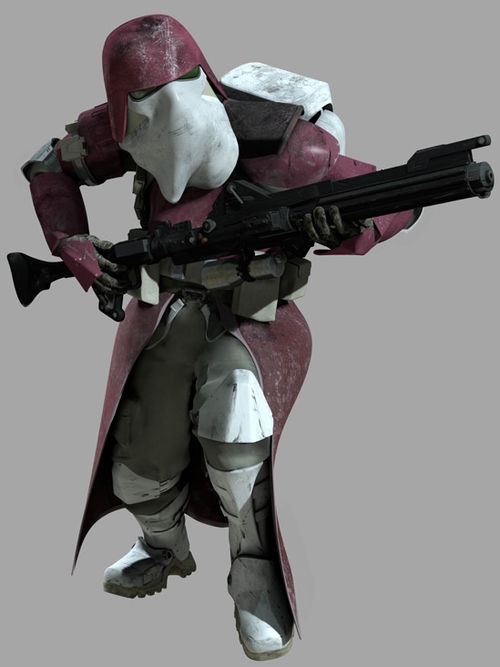 These elite clones from the 21st Nova Corps were well known in the Grand Army of the Republic for their combat prowess and aggression. They excelled at taking control of hostile environments. As an Enforcer, they'd use upgraded DC-15LE blaster rifles, have 350 base health (like Death Troopers), and Overload would increase their RoF and stability when firing as well as removing the need to cool down their weapon. Their Explosove ability would be a Droid Popper grenade, which has a reasonably large explosion radius - 7 or 8 metre radius without cards - and deals 125 damage at the centre. It also disables droid servos, slowing down their movement and turn speed. The damage and stun effect are smaller the further from the explosion you are. The Galactic Marine takes no damage or stun from the grenade.
Rebellion Enforcer - Gigoran 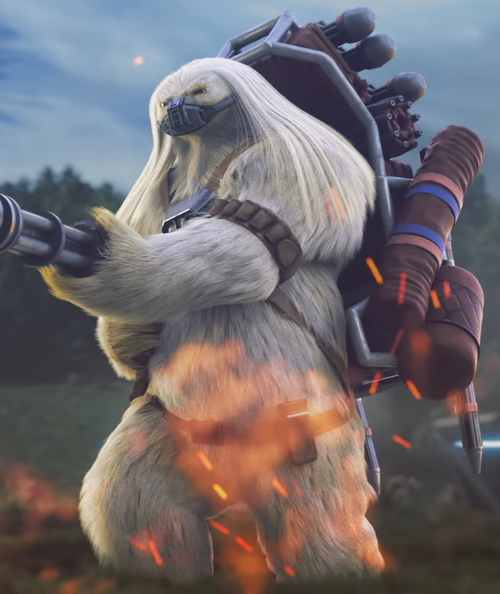 These large, furry creatures from the planet Gigor were renowned for their strength and resilience. As an Enforcer, they'd use a version of the Sentry rotary blaster cannon as their primary, dealing damage per shot somewhere between the base ability and Mobile Sentry, dealing a lot of damage but at the cost of slower movement whilst firing. They'd have a lot of health, as they are a slightly larger target (a little taller than a Wookiee) either 400 or 425 base health. When firing the primary weapon, they'd have their movement speed slowed slightly - only by about 10% or less though. Overload supercharges the rotary blaster, making it fire slightly slower but deal heavy explosive damage in a small radius (about 50 cm or less). The explosive ability is a launcher which fires a sticky explosive charge which will sit on the surface it lands on for a 5 seconds before automatically detonating, or the ability is retriggered. It has a reasonably large explosive radius if it is detonated immediately - 5 metres - but every second this is left, it expands by 50 cm and the damage at the centre is increased by 10. It deals 250 damage at the centre if detonated immediately. One last thing to note - the primary weapon can fire for a certain amount of time before overheating, like the Sentry (but it's slightly shorter than the base Sentry duration), and if you don't fire for more than 1 second the cool down automatically starts. You cannot manually cool the weapon.
You'll notice I haven't made a concept for a new Resistance Enforcer - that's because I think the Wookiees could reasonably fit in the era of the New Republic as Enforcers. In the Prequel Era, they were almost exclusively found on Kashyyyk - I think they should be an option when playing LS on Kashyyyk, as well - so it definitely wouldn't make sense for them to be found on a secret cloning facility on Kamino. We know they were almost all enslaved on Kashyyyk or Kessell - we see a few in the mines in Solo, actually - so they wouldn't be fighting for the Rebellion. By the time the Resistance rolls around, though, they've all been freed, and the Empire's gone. As far as we know, the First Order hasn't captured a load of them, so it makes sense that they'd be fighting with the Resistance for their freedom.
So there are my thoughts - what do you guys think?

A horde of Bipedal Millennium Falcons with cheeseburgers for legs

If there seems to be random words or phrases in my post that don't make sense, blame Autocorrect.
#COOMCAIBDJF
5