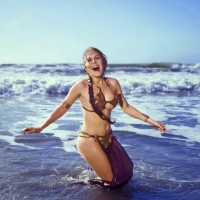 WonaBett
94 posts Member
July 1, 2018 5:20PM edited July 2018
Go back to pre patch blocking with a few tweaks
-Make holding block only deflect blaster bolts and deny force powers
-Make deflecting blaster bolts drain 50% more stamina than it did pre-patch
- If you simply hold block against a saber attack it will do 50% damage, and not stagger the attacker or waste any more o f either parties stamina than an unblocked hit.
-To block and stagger the attacking saber user
the blocker has to be blocking AND also hit (RT/RightClick/R1) as the sabers collide to successfully Parry the attack. (Drains the same amount of stamina as current blocking)
-Non lightsaber melees go through lightsaber blocks
-Lightsabers deal damage passively if you stand too close to an enemy lightsaber (10DPS)

-Also bring back a form of saber locking (Like Vader and Luke in the previous game)
when two saber users both swing at the same time it will go into a QTE (button out of reload/melee/attack) wrong button will lose the lock, being slower than the opponent will lose the lock (maybe just use the kick animation for maul/luke/Rey) damages the loser by 300hp, both parties have 75% damage reduction while this is happening. (All lightsaber users can initiate this)

Before the patch whoever attacked a block first lost, now blocking is hardly any option in high stakes fights.
Post edited by WonaBett on July 2018
3