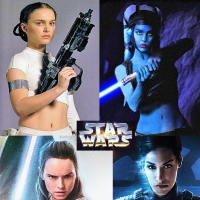 BrandonNighthawk
337 posts Member
August 20, 2018 11:08AM
Well, apparently I have just been burned out on BF 2 since updates are so darn slow and no new content since the minor Solo season. Because of this and keep on thinking of the great nostalgia of SWBF15 . So I reinstalled it. I mean don't get Me wrong, BF2 has great maps, fun campaign, and stuff (which I still play a bit and My daily crate that is all I have been doing for a while now) but to Me SWBF1 has that awesome OT feel and cool characters that I can emote more that is hilarious. I also like the Jakku & Endor maps way more on SWBF1 as well as I feel that are better designed.

I am so glad that many players still play WA a lot but DLC seems dormant at times on PS4.

So, did you do what I did for the same or different reason? Are you still for the first game, for the second, or play them both regularly? This is just something that was on My mind guys:)
"Remember: Looks are deceiving, everything We know may not be true, We are only beginning to learn." - I
2