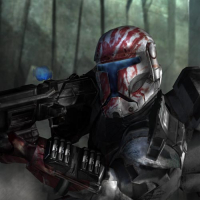 hill1232
22 posts Member
October 26, 2018 12:08AM edited November 2018
Alright, so we all want Clone Wars era Heroes, but not just Jedi and Sith. We want blaster wielding heroes as well! I got to thinking about a Clone Commander 'Generic Hero'. People will probably say 'then why not do a new class and not make them heroes if they are generic' and I have an answer for that, which comes later in the post.

Now bear with me for a moment, I know you all want specific clone commanders and such, but when you get down to it they would all end up being the same copy and paste so here is my idea:

Clone Commander
Health: 600
Weapon: DC-15le
Q - Thermal Detonator: Basic grenade that deals Area of Effect damage.
E - We Fight Together!: All allies and within the radius and the Commander gain a shield and Increased Movement Speed. The Commander takes out two DC-17 blaster Pistols for the duration of the ability. (Pistol has the same stats as the Jet Trooper).
F - Set Up Defenses: The Commander sets up defenses for his troops to take cover behind. These defenses can be destroyed if they are attacked enough. The shields act like the Heavy's personal shield with a health limit, but the defenses are stationary and are more spread out to fit multiple soldiers behind them.

Let me know what you think! Any ideas for abilities. The F (Set Up Defenses) is the only one I am skeptical about! How about it DICE?! It would be really easy to do because they're all modeled, I know you are working on the Dual-Wield System, and this would be an amazing way to do it! I hope you consider it!
Post edited by hill1232 on November 2018
7