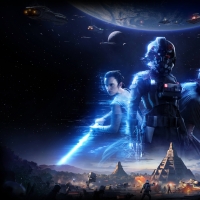 tigerbah56
24 posts Member
January 4, 2019 5:43AM
Here is a thread to consolidate all our thoughts on DLC in 2019. This allows EA/DICE to look at one thread and see more. Following is what I personally want to see for 2019 and beyond please like and leave your thoughts!

Skins:
-Old Luke slime with master robes and green saber
-Old Leia and Han
-Battle damaged Vader
-Dark Anakin for Vader (how he looks when fighting Obi Wan in ROTS although give him red saber? Was something like this in old PS2 ROTS game that was cool)
-Obi Wan “Ben Kenobi” skin
-Jango Fett skin for Boba instead of creating an all new Hero

Maps:
-Utapau
-Mustafar
-Scarif (from campaign) *possibly great one for new game mode with two capital ships flying above the planets shield?? Depends on how new game will work*
-Bespin (from Campaign)

Game Modes/Playlists:
-Hero Hunt from the last Battlefront, loved that mode!
-Hero Blast/Strike (Blast/Strike but includes max 1 hero on each team at a time for a reinforcement. could even be limited time event that’s brought in now and then)
-Weekly Era: every week an Era is chosen and for that week you are put into a play slot of all game modes for maps within that era
-Wampa Hunt (just would be fun lol)
-Hero Survival. In this playlist you are matched with 3 other players. Once a map is chosen you can only pick heroes from that era. You must defeat 200 enemy troopers and reinforcements to win the game and there is no health regeneration other than hero abilities. (PS: A Geonosis one would be awesome out in the GA map with Padme, Anakin, Obi-Wan, and Mace windu fighting off droids) this is basically online Arcade and difficulty of troopers as well as amount of reinforcements progresses as game progresses


Seasons which could work:

I know this is A LOT and probably will never get all of it but even 50% of this added to the game would be amazing!!!
4