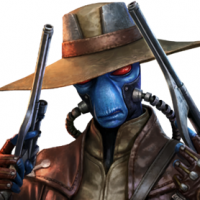 Jakeman
89 posts Member
February 4, 2019 9:39PM edited February 2019
Seriously?! What in Aluminum Falcon is going on here? I can't even imagine what's going on over there at EA/DICE. I want to believe they are delaying it because we will be getting ground to air transport and combat, multiple players in vehicles, and other features similar to Battlefront 2005. Unfortunately, given the track record they are probably fixing Takodana chickens showing up in space and Leia speaking Chinese.
#wedontevenhaveanameforit