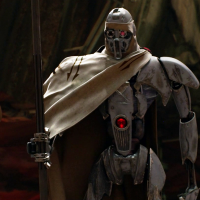 dominokerem
488 posts Member
February 28, 2019 8:52PM edited February 2019
Buffing the other heroes instead of nerfing Anakin would change the game in a good way. Like, I would want to see Darth Vader Choke killing some enemy troops, or Grievous slaughtering some clones with his Unrelenting Advance ability. For example, giving Gtievous %90 damage reduction when using Unrelenting Advance would fix the problem about him. And the same for Darth Vader's choke.

Removing the health cards would have been great too so that we could pick 3 cards instead of 2. Because the health on kill card is a must have.

The only nerf for Anakin maybe would be lowering the damage he deals with push. Msybe he deals %30 less damage with his push eould be enough for him. Poeple will be complaining about Galactic Assault mode with the hero improvements maybe. So, lowering the number of heroes woulf be the solution. Makes them hard to get, but you can feel the power and preciousness of the heroes at least.