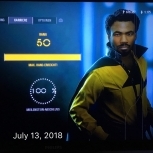 We don’t need this!!
People complained about that because they want new levels because they had nothing to grind for, no goal. For me, a player with 1.7+ million credits and everything maxed out .. I don’t need more lvls to earn credits. Really, why should I need them when you have everything unlocked at lvl 70?
As it seems, you won’t get any grants If you reached e.g lvl 90.
And that’s the point. This idea has an improvement of 0,0%.

To fix their idea, they should increase player level from 50-100 with Special Skin rewards at each 5 or 10 lvls or reintroduce seasons!

By this, I mean for example a Rogue One Season that has included:
-Level Cap increase from 50-60
-Choose your side at the beginning, play as a community, after each week, the side with more wins get a special xp/credits reward, also side playing affect the following:
- Scarif Map Pack for GA, HvV etc.
- Scarif Rebel + Scarif Imperial Skinpack, which you can unlock at lvl 53 and 57 (linked to the fraction you choose at the beginning, like if you choose the rebels, you get the Rebel skin pack from Scarif at 53 and the emperial at 57 or the other way around)
- Krennic and Erso as two new heroes, 1 you can unlock by choosing your side, the other one if you reach lvl 60

-> with this Season Concept, Players will have a good reason to lvl their player lvl to unlock new content. Even if they reached lvl 60, they want also max out the second hero which gives them a second reason to play this game after hitting 60.

So @F8RGE @EA_Charlemagne, please have a Look and listen to your Community .. yes you listed to them, but wrong. No one wants 1000 levels, a never ending grind which grants you with nothing.

Listen to us, make reacheable content, even for new players who I think would be afraid if they see. „ Oh, Battlefront II, lets have a look ... what? I can level a class to 1000? I will never reached this!“