Darth Vader is THE second most overpowered hero in HvV

Thechosen1_anakin
8085 posts Member
August 12, 2019 3:52PM edited August 2019
For some odd reason he has received throughout the 2 years the game has been out almost nothing but buffs. He received 1 nerf which addressed his choke but, other than that just buffs. Darth Vader is a hero who cannot be beaten by a single character outside of maybe Yoda(broken) when characters are of equal skill. He easily defeats the others heroes into submission especially blaster heroes like Finn & Leia. His high defensive stamina, high health & his combo makes him THE second broken hero in HvV which will be made even worse in 2 weeks. Here's how to nerf vaders in HvV without touching him against troopers

Force Choke
This move cannot be dodge, has 90% damage reduction, deals massive damage & to top it off has CC immunity. So he will always have a guaranteed 470 damage combo with punishing grip & 500 to 515 with rage. Where I'm I getting these numbers from when vaders choke throw combo only does 300 you say? Take a look

Performing the move like this grants him with & without rage 500 & 515 damage. That is pretty much the entire opponents health bar & leaves Finn & Leia at 1 shot & han & other at 2. Also performing it like this gives him 470 if you don't dash behind

That is just with punishing grip & focused rage. Without punishing grip & performed like the vid above he still does 400 that is guaranteed. I have seen post on here & on Reddit saying make it dodgeable which is the wrong way to solve the problem. Instead of making the move useless against sabers like passionate strike might i suggest instead of making it rollable/dodgeable nerf the damage on both moves. Force choke should do 100 damage against heroes & with punishing grip allows him to do 150. The moves CC immunity should also be removed. I should be able to be a good teammate & save my teammates from his damaging choke.

Saber throw
The move that puts the icing on the overpowered cake is this move right here. Vaders saber throw should do 90 damage against heroes. While not remotely op by itself the move coupled with choke does way to much damage & that's without the ever elusive return hit Vader can hardly ever get. Since the damage is low vaders saber throw should be exactly like mauls in the sense that the return hit is almost always guaranteed. Which would make his saber throw card which increases the damage by 40 more viable. This along with the changes to choke mentioned above would bring his damage down to 320 & 350 without rage & punishing grip. & with rage & punishing grip 385 & 415. 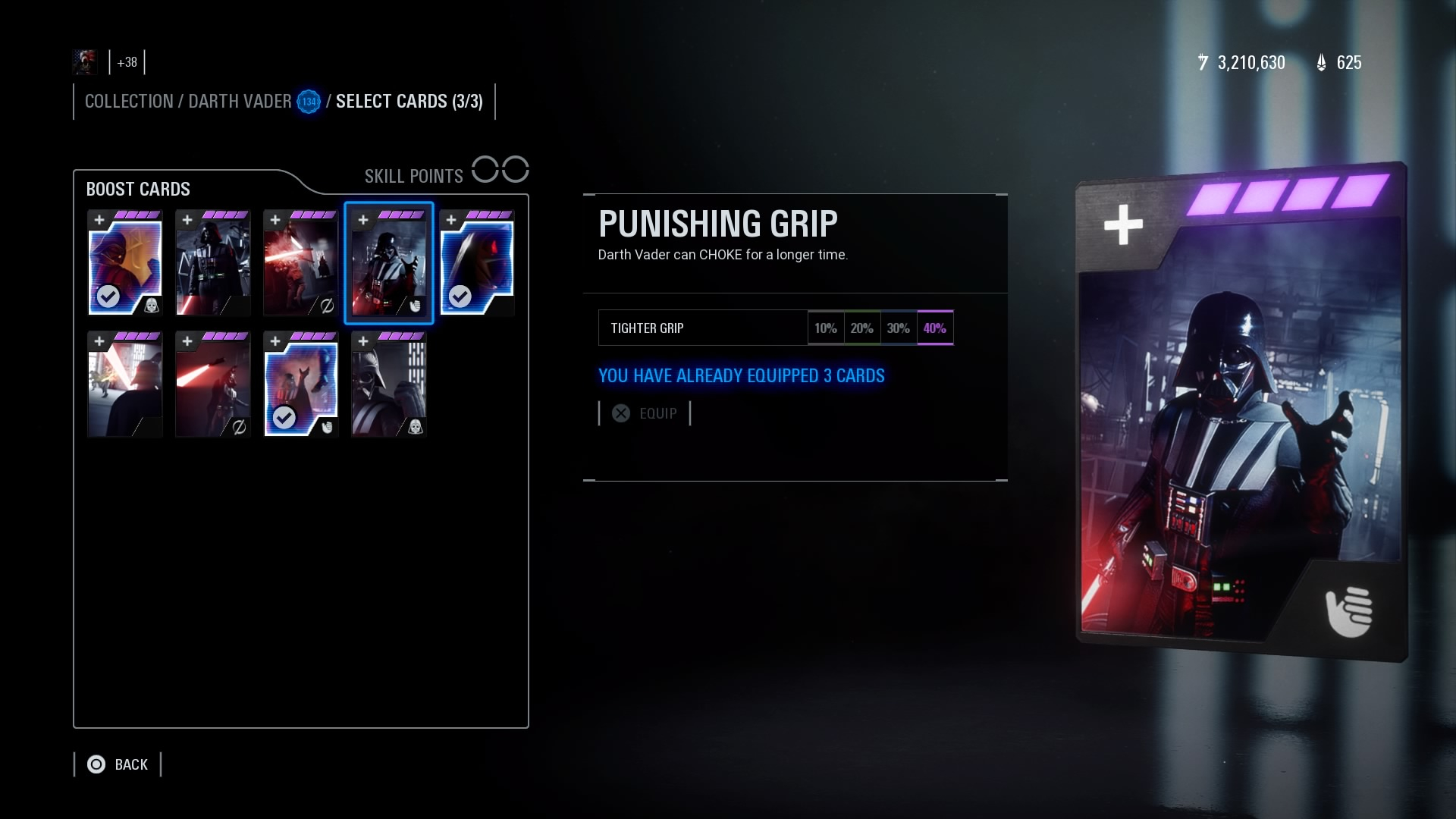 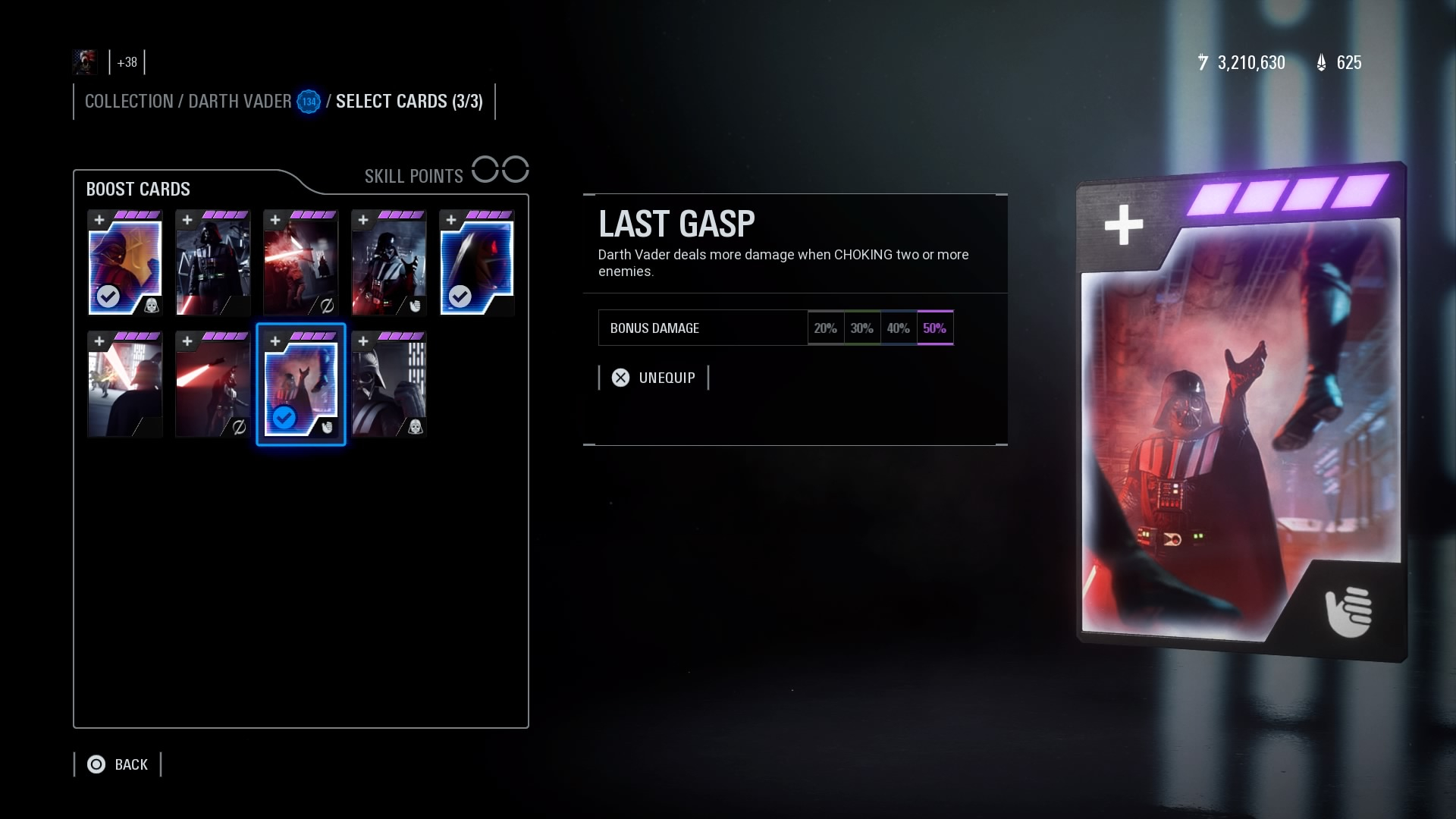 These 2 cards allow vader to do an extra 72 damage which equals 262 damage off a single choke & when performed like above let's him do 542 & 587 damage exactly. With the suggested nerfs above vader would do 222 damage of choke which is the exact amount of damage anakin does with retribution & drop his combo damage with these cards by 100.
Post edited by Thechosen1_anakin on August 2019
25