Does the game 'reward' button bashers? Seems to be a case of hack and slash with sabers, and they're 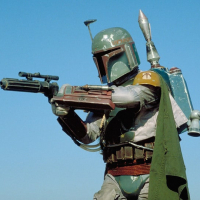 Was playing as Boba Fett yesterday, evaded LS, flew away, nope pulls me back in midair and just slashes away at me.

Same for those commando droids too. WAY too overpowered!?!?
5