When Was the Last Time You Saw a Saber Hero at the Top of HvV? 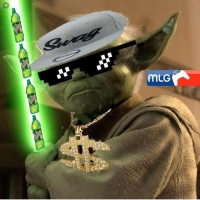 MLGGrandMasterBroda
2910 posts Member
January 11, 2018 1:28PM
I've played close to 100 HvV matches this week and EVERY SINGLE ONE finished with the top player using a blaster hero or Palp. I honestly can't remember the last time I saw a saber hero at the top since shortly after launch. I rarely see Luke or Yoda anywhere other than the bottom and have never seen either at the top. What have your experiences been?

In my experienc, saber heroes seem quite decent 1v1, but I guess their DPS just isn't enough to keep up with blaster heroes over an entire match. I think the score screen at the end needs to change. All it does is encourage blaster heroes, while the old screen encouraged people to play saber heroes too because in my experience, it is much easier to get longest killstreak in HvV with a saber hero, even if you don't get the most damage.
The best Yoda loadout: https://1drv.ms/i/s!AveJpgcuWkNfdw7ZwgFzn3T3O8g


How to effectively play Yoda: https://battlefront-forums.ea.com/discussion/97820/i-have-waited-a-long-time-for-this-moment-my-little-green-friend-yoda-guide


"Attachment leads to jealousy. The shadow of greed, that is. Train yourself to let go of everything you fear to lose."

Links to all my Yoda tips/discussions in the spoiler tag to save space. ^^^

Respect your fellow users (and Yoda), help improve the game and have a great day!
0