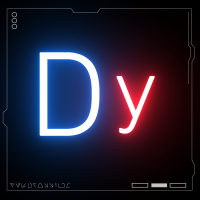 3 days ago I asked the community https://battlefront-forums.ea.com/discussion/90457/let-them-know-what-we-want-vote/p1 (Battlefront2 forums and R/starwarsbattlefront and R/battlefrontTWO) to fill out a survey about the next Season, wanted characters, maps and features. I got over 250 completed surveys sent in.

Before we jump into the stats, there are a few things to note.
I will first discuss the questions one by one, thereby providing some explanation for what we are actually seeing so everyone can understand. Q1 The next Season should be about: 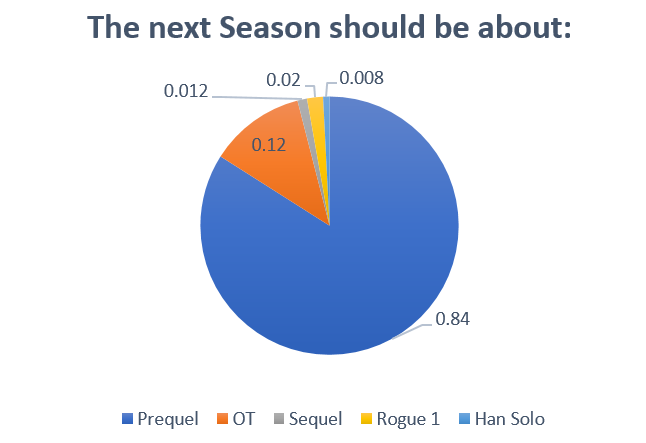 This picture shows the percentages of each era/film voted. We can see that a Prequel Season is highly wanted (as the next Season). 210 out of the 250 voted Prequel Season. Q2 From the prequel era I really want to see these as new locations: 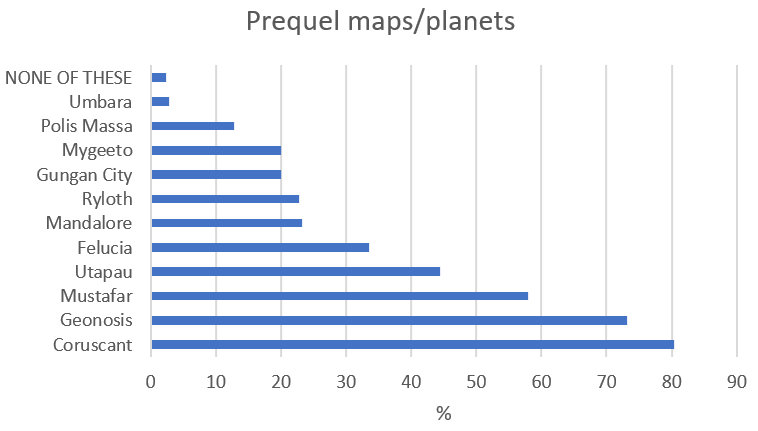 People were asked to select the maps they wanted to see as new locations in the future. Therefore, they could select more than 1 answer. Not only the people that answered Q1 with prequels were asked this question, but the whole group. Just over 80% wanted to see Coruscant as a new location in the future.
Also, note that the 'NONE OF THESE' option was selected the fewest times. Q3 From the original trilogy I really want to see these as new locations: 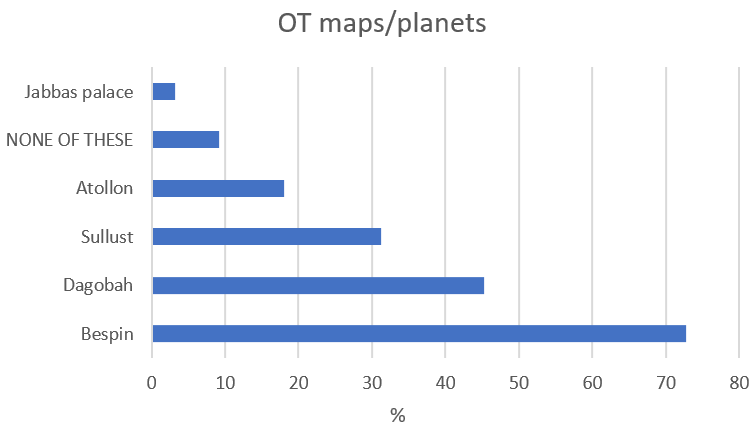 Bespin was the most wanted map.
Note that 'Jabba's palace' are only results of people filling this map in by 'Other' since it wasn't an option like the other maps in this question. I forgot to add this as an option. Although it has fewer votes than the others due to this reason, I still wanted to show it so we don't forget it a next time. Q4 From the sequels I really want to see these as new locations: 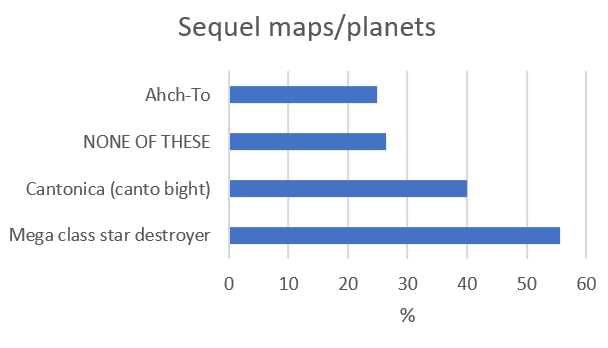 The sequel maps question has the highest % of 'NONE OF THESE'. Mega Class star destroyer has a higher % then most of the Prequel locations. Q5 From the 'Rogue One' film I really want to see these as new locations:

Scarif has above 70% of total votes. Still the 'NONE OF THESE' has 10% of the votes. This is higher than the OT or Prequel locations. Q6 Would you like to get characters from 'The Clone Wars' series?

More than 60% says actively YES for Clone Wars characters. Combined with 'Don't mind' this is over 80% of players that would be fine to see characters from this series. Q7 Would you like to get characters from 'Rebels' series? 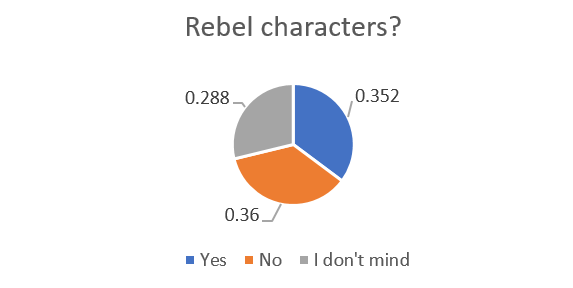 Almost equal % of players say NO to the implementation of Rebel characters as YES. The % YES combined with 'Don't mind' is about 64%, which is lower in comparison with the Clone Wars series. For the next questions about specific characters, I have done some computations. There were 6 options possible for every character given. These are stated below. To be able to compare the results with eachother, I have assigned values for 5 of the answers. ('As a vehicle' is left out of consideration at first). These values are given below.
For comparison between the maps, I have computed sum of (each value*votes for that option)

Why didn't I just assigned values 1 to 5? This gave graphs with values from 250 to 1250. You cannot directly draw conclusions from the graph alone. Now we can say something about the graph:
*if many choose WORST OPTION and MOST WANTED about equal times, then the value will be around 0.

With this in mind lets take a look at the stats.
Q8 PREQUEL-HEROES: Which heroes do you want to be added? 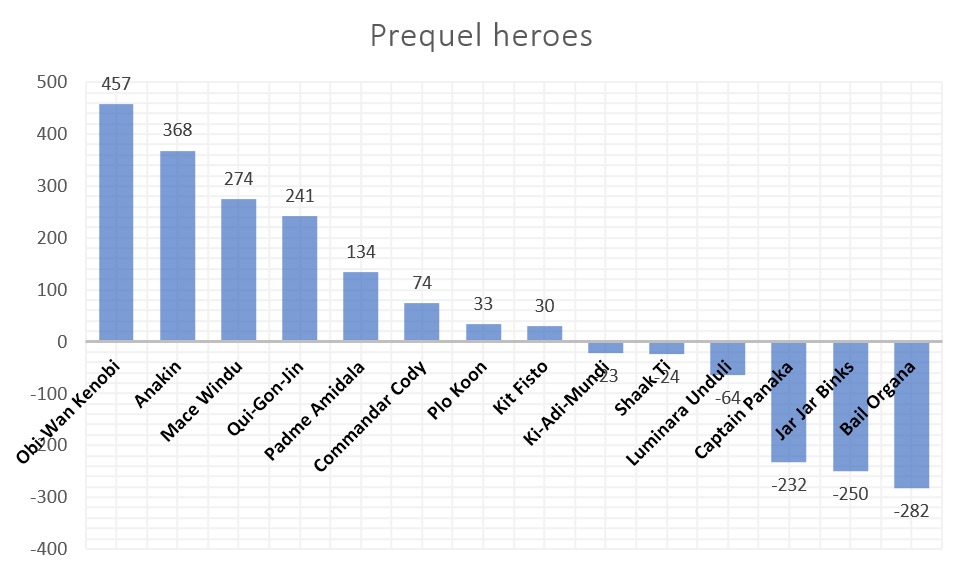 Obi-Wan is by far the most wanted hero of this survey. Remarkable is the amount of 'Casual Jedi' around the value 0. Also is it very clear to see which prequels heroes have the lowest values.
NOTE that Qui-Con was added later to the survey. Still, he has received mostly positive values. Q9 PREQUEL-VILLAINS: Which villains do you want to be added? 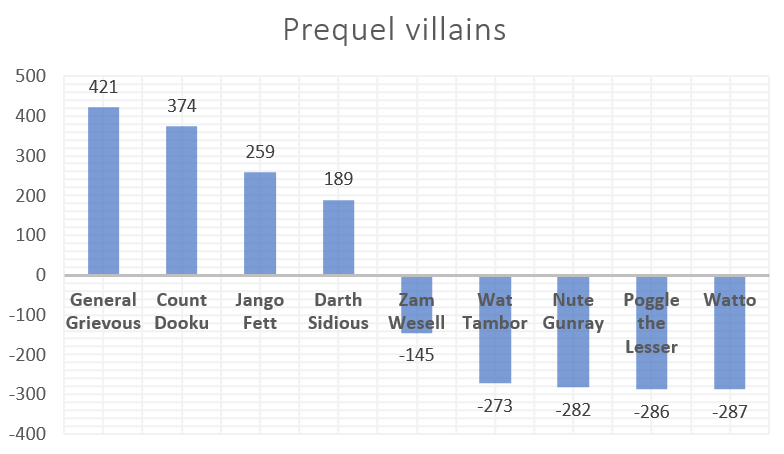 There is a clear cliff between the characters. Grievous and Dooku were the most wanted. Q10 ORIGINAL TRILOGY-HEROES: Which heroes do you want to be added?

No positive values for any of the OT heroes. Only Nien Numb has scored around the 0. Q11 ORIGINAL TRILOGY-VILLAINS: Which villains do you want to be added? 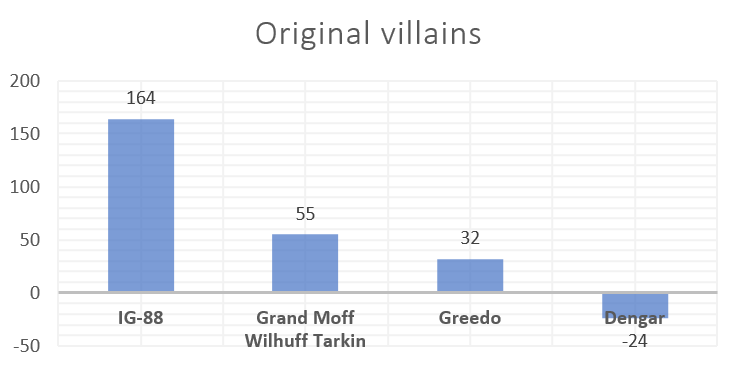 More positive values for the OT villains. Keep in mind that IG-88 seems very wanted here, but comparing it to values of other characters (Obi, Dooku) you will find that this is still far less. Q12 SEQUELS: Which heroes do you want to be added? 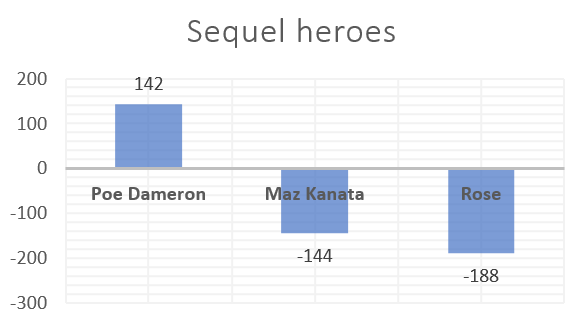 Poe Dameron is only in the game as vehicle right now. The other ones have lower values. Q13 SEQUELS: Which villains do you want to be added?

Snoke and Hux have positive values, but these are lower compared to other villain values (Grievous etc.) Q14 REBELS: Which characters (heroes/villains) do you want to get added? 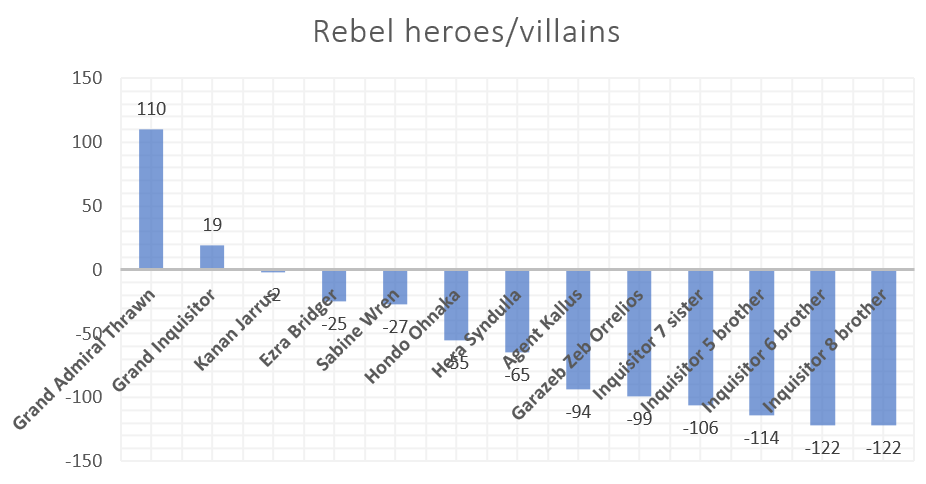 Thrawn and the grand inquisitor are the only ones with positive values, but are lower compared to others previously shown. Q15 CLONE WARS-HEROES: which heroes from the series Clone Wars do you want to get added?

Ahsoka has a high value which can compete with other heroes. Q16 CLONE WARS-VILLAINS: which villains from the series Clone Wars do you want to get added?

Savage Opress has a small negative value close to the 0 (which means indifferent) Q17 ROGUE ONE: Which characters from 'Rogue One' would you like to be added?

Jyn and Krennic are the most wanted characters (also the character from the last game). K-2SO has almost the same value as Krennic. Q18 Is there any other character that I forgot that you would like to see added? You can answer as many as you want. If there is none please add '-'

It seems that I forgot Wicket (3x), Jabba (2x), Gungan warriors (2x), General Veers (2x). Other answers were concerned about different looks for characters (skins). Q19 What is the most important feature you would like to see added ASAP? If there is none please add '-' 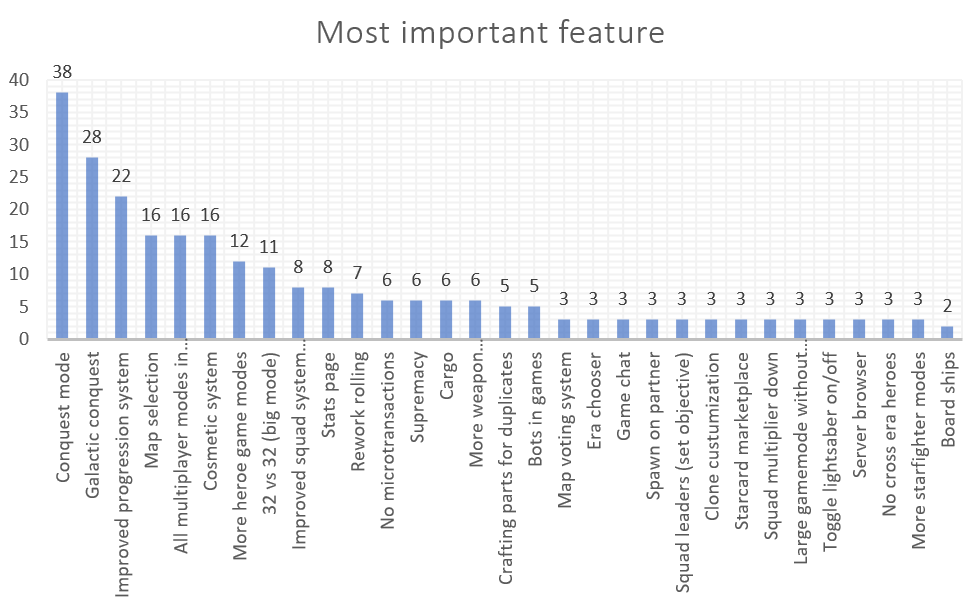 Note that I didn't give a choice in this question (open question). This is done so that we can see what players find most important. No one wrote more than approx. 5/6 things.

Note that some features are very similar (spawn on player --improved squad system) but I wanted to be specific about what people wrote. Therefore some values may be added together to form a better representing graph in which general field improvements are needed (squad system, more modes, etc).

Conquest mode and Galactic Conquest are the most requested. Q20 Here is a list with some features.

Most features have positive values. This is what we expect since most features are positive (improve anti-cheat) instead of negative (worse anti-cheat for example). The most wanted feature is (again) the implementation of a conquest mode. That is it for the questions. Two other graphs (all characters, all maps): 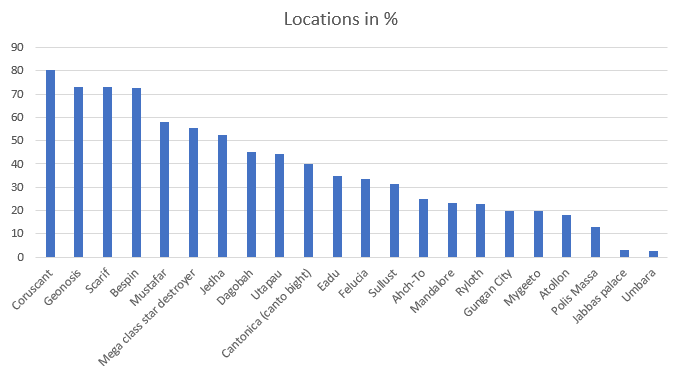 The heroes that were chosen specifically for 'Vehicle only' were the following. (threshold: at least 10 votes) 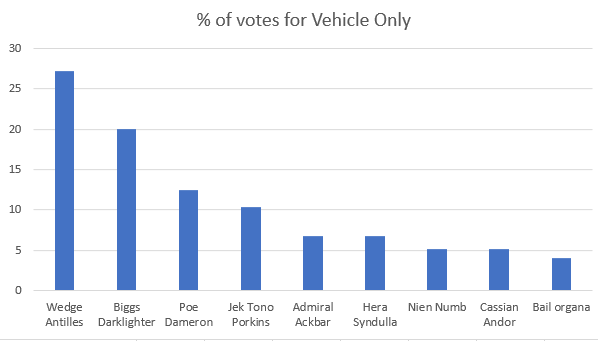 NOTE that for consistency, this questions should also be asked for other existing heroes/villains that are already in the game (such as I did with Poe Dameron). I only thought of this after finishing the survey.


Feel free to compare some other things, draw different conclusions by using the values of this.
For your convenience, here is the Excel spreadsheet.
https://drive.google.com/file/d/1JOw7CkKhDaU4IhAGowE8ErCkiLCdle4o/view?usp=sharing

If there are any questions, be sure to ask.

Have a great day!