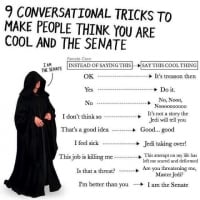 Budley_Bailey420
129 posts Member
February 1, 2018 10:37AM
Really starting to dislike Galactic assault. Tired of having to pick Rey so my team can compete with the purple carded palps on the other team killing EVERYTHING. Hes just so easy to use. I myself have purple cards for him, and it got old about a week after his huge buff. But every night im running into the same cool kids sweating prefusely at the thought of not being the guy in 1st when the game ends. In short. Just nerf palpatine to oblivion, Please.
31